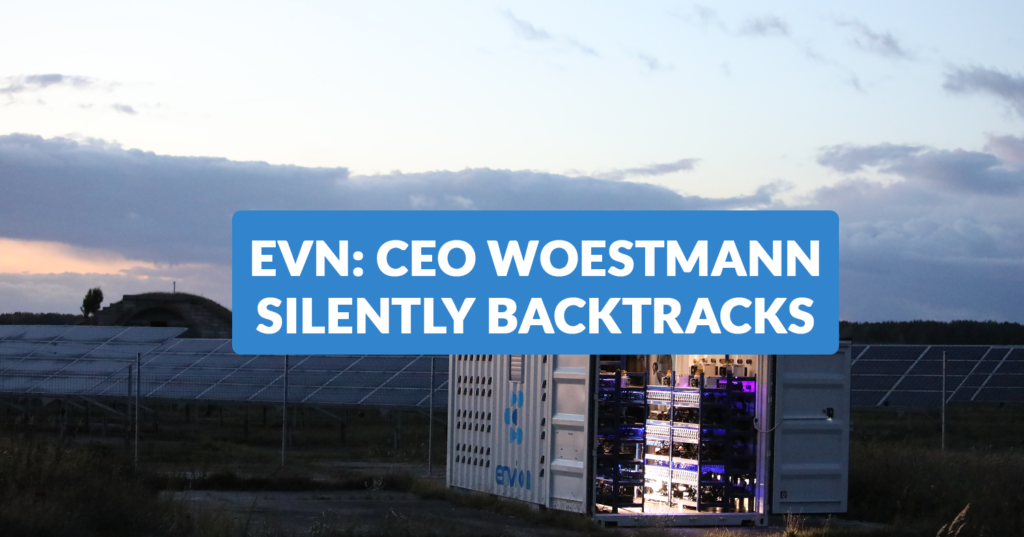 May 20, 2018. BERLIN — CEO Matthias Woestmann changed his story accusing envion AG’s founding team of illegally generating 40 million extra tokens as part of the company’s $100 million Initial Coin Offering (ICO) less than 48 hours after publishing a press release. He made the false claim in response to allegations which went public early Wednesday that he illegallydiluted the founders’ majority shareholdings. No reason for the change has been offered for his new version of events.

In a press release dated May 16th, Matthias Woestmann stated that 40 million “have been generated illegally” by envion’s founders. An incoherent accounting of tokens replaces that accusation in a May 18th publication which was delivered by email to envion investors and published online.

The newsletter states that 103 million of 127 million tokens were legitimately created. Woestmann’s accounting leaves a 24-million-token surplus while simultaneously stating that only 13 million tokens remain illegitimate after eliminating 7 million belonging to a pre-sale investor who defaulted. It goes on to state that 15 million illegal tokens would be on the market were 5 million to be destroyed in a process called a token burn. No explanation is provided for 4 million tokens excluded from Woestmann’s revised calculations nor the 20 million token difference in figures.

In the wake of his legal troubles, Mr. Woestmann has reinterpreted the ICO prospectus, its guiding legal document, to exclude tokens sold to pre-sale investors from the greater pool of sale tokens.

There are no grounds for this since the ICO prospectus specifically names the pre-ICO sales process. The CEO was one of only two board members along with board member Cyrill Staeger who approved the company prospectus, and he was the one responsible for handling the agreements for the pre-sale transactions.

Envion’s founders responded to the changing allegations with a detailed blog post on a new website a www.envion-founders.org launched as part of a “total transparency” campaign. In the post, they break down the accounting for how the 127 million tokens were generated along with links for investors to verify their locations on the Ethereum blockchain.

Woestmann himself concedes founders requested authorization to destroy tokens, but offers no explanation of why he did not agree or respond to communications on the matter.

Likewise, Woestmann “did not deny” allegations that he illegally took control of envion from the company’s founders according to an interview on website Swissinfo.ch.

After executing an illegal capital raise and diluting founders’ shares, Woestmann gave the new shares to Thomas van Aubel, an associate known for similar maneuvers which have landed him in legal trouble from disgruntled investors. Envion’s founders are suing both Woestmann and van Aubel in Berlin court.

ENVION, WOESTMANN, THE APATON GROUP, AND THE CANADIAN BIG CONNECTION and its ‘REPORT’

This is an ARTICLE written by fintelegram.com about the connections between Envion CEO Matthias Woestmann…