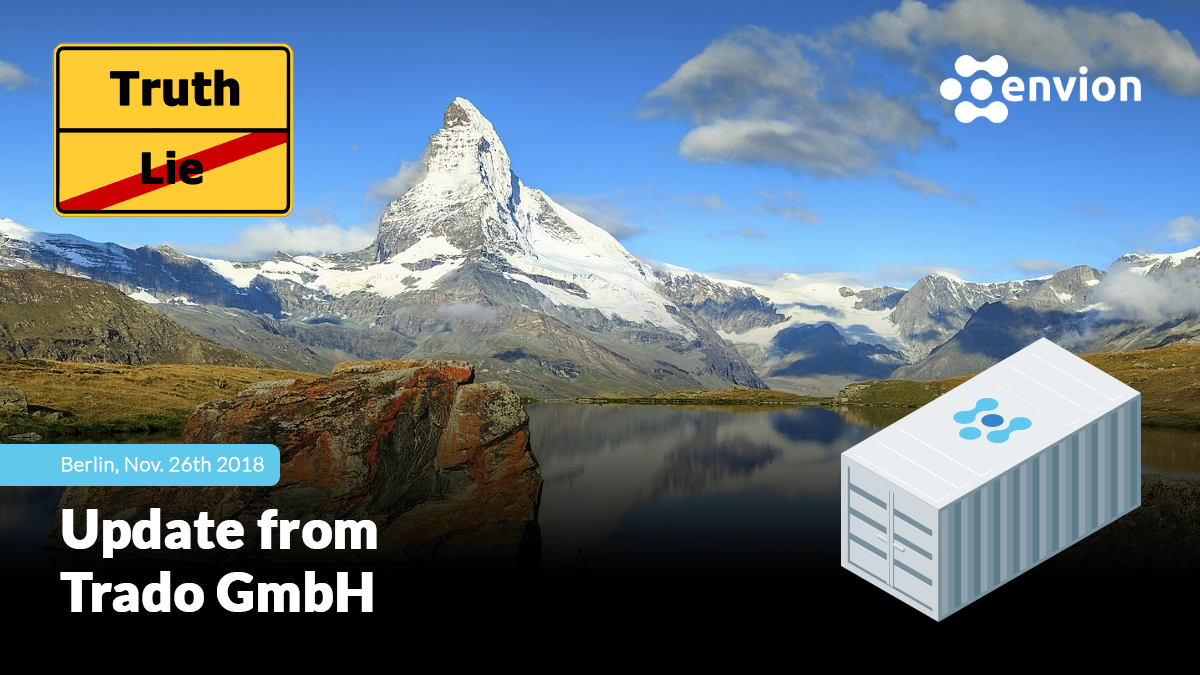 26.11.2018. BERLIN — Sources involved in the proceedings concerning Swiss crypto-mining company envion AG are currently circulating a non-public decision by the Cantonal Court of Zug (Switzerland) dated 14.11.2018 concerning the liquidation of envion AG, according to information provided by Trado GmbH, the company representing the interests of envion’s founders. The ruling states that envion AG should be liquidated because of the failure on the part of chairman of the board, Matthias Woestmann, to meet a deadline previously set by the court to remedy structural deficiencies in the business organization, namely to obtain legally-required auditors.

The decision of the cantonal court is based on misrepresented information from the board of directors of envion AG, Matthias Woestmann, who aims to see envion liquidated and has already disseminated misinformation on other matters such as the token production to damage the company. The false report on which the verdict is based is now being corrected with Swiss financial regulator FINMA and the cantonal court.

Michael Luckow, who represents the founding team of envion AG in the dispute against board chairman Woestmann, has responded,

“We will continue to use all means available to us to fight against a liquidation of envion AG. We do not want a liquidation. We have done everything possible to prevent a liquidation. A liquidation would be the ploy and the goal of Matthias Woestmann, who could benefit from it to the detriment of the investors.”

Under chairman of the board Matthias Woestmann, envion AG’s corporate structure was already suffering from a critical deficiency. Swiss law requires that a public limited company such as envion AG to have an auditor in order to legally conduct business. During envion’s Initial Coin Offering (ICO), such an auditing body would have already had to be engaged by Woestmann as chair of the board of directors, a task they “forgot” according to his own words. Woestmann later justified the shortcoming with various reasons, most recently with the fact that he allegedly did not find a chartered accountant because Trado GmbH, which was involved in the preparation of the ICO, did not provide the data necessary for the audit. Woestmann has failed to involve the founders in discussions with auditing firms in order to work out an auditing process with them despite the founders’ requests.

The founders are not able to directly contact the most recently consulted auditing firm, BDO, in order to deliver necessary data since the founders are excluded as minority shareholders after a coup-like capital increase carried out by Woestmann and perceived as unlawful by the District Court of Berlin diluted their majority stake in the company.

Mr. Woestmann has in fact received the information requested by him from Trado GmbH, which reflects the entire accounting of the ICO. It should be noted that due to the large amount of data created by the ICO, it is by no means clear which degree of detail was needed by the auditors, e.g. in terms of investor-specific data. In any case, Trado GmbH submitted the aggregated data for the ICO to Woestmann over the course of January and February 2018. Whether and to what extent Woestmann forwarded these data to the auditors is not known. At no time has Trado GmbH been informed by Woestmann that the auditors lack required information. In particular, Woestmann has never brought the auditors directly into contact with Trado GmbH in order to clarify what is needed as would be the normal process under such circumstances. The fact that Woestmann failed to do so suggests only that this was intended to prevent satisfactory clarification for the auditors.

Only after the Swiss Financial Market Supervisory Authority (FINMA) opened an investigation and entrusted law firm GHR with the envion investigation, thereby “unseating” Woestmann as board chairman, was it possible for Trado GmbH to discuss the level of detail with the investigating lawyers. Additional information requested was provided by Trado GmbH in full. It is still unclear to Trado whether data requested by GHR’s investigative officer would be sufficient for an auditor. In any case, Trado GmbH nor Michael Luckow have not been included in discussions with auditors until today.

The reasoning of the cantonal court Zug is based solely on the information provided by Matthias Woestmann, who continues to claim that Trado GmbH did not provide the information. The presentation of the facts in the judgment of the cantonal court is therefore erroneous and based upon a distorted presentation of facts. Trado GmbH demonstrably supplied relevant information as requested, most recently to the lawyers employed by FINMA.

“The decision of the cantonal court Zug is ultimately the final result of Woestmann’s long-cherished masterplan for the liquidation of envion AG. His idea is that investors will get back the cryptocurrencies they invested, ETH and Bitcoin, but remaining funds due to the price decline of cryptocurrencies would go to him personally. For our part, we will continue to fight liquidation, as our concept of Mobile Mining Units (MMUs) remains viable — something the GHR lawyers appointed have recognized,”

The Zurich Tages-Anzeiger revealed Woestmann’s plans to pursue with the liquidation of envion AG in its October 27th issue. According to newspaper report, Woestmann asked the founders and Michael Luckow to “dissolve envion AG and repay investors their money in cryptocurrencies.”

The prices of crypto currencies have fallen sharply since the beginning of the year. Most of the approximately USD $100 million in capital raised from investors has been exchanged into stable dollars, according to Tages-Anzeiger. “Now, if the money is returned to investors, a remainder in the double-digit millions would be left behind because of the lower exchange rate for cryptocurrencies,” writes the newspaper. This proposal by Woestmannwas flatly rejected by Michael Luckow as “morally reprehensible.” Luckow made Woestmann’s plans public in order to thwart his plans.

Envion’s founders are convinced that a liquidation of envion AG would ultimately be a loss for all parties, especially the investors.

“Should a liquidation be unavoidable in spite of all our attempts, the founders ask that all funds remaining in envion AG are distributed in their entirety to the tokenholders,”

stated co-founder Luckow who recalled the origins of the crisis surrounding envion AG, “It all started when Matthias Woestmann broke with the founders and implemented a capital increase behind our backs in order to seize control of the company and was ruled to be illegal by the district court in Berlin. From one day to the next, he robbed the company, the hard-working founders, and a large team. The envion project which so many investors believed in just stood still from one day to the next.”

Trado GmbH represents the interests of envion AG’s founders. The founders’ shares were diluted by Woestmann from 81 percent to 31 percent via an unlawful capital increase. Thus, the founders lost any influence in the management of the company. Instead, Sycamore GmbH appeared unexpectedly as envion’s new majority shareholder. Berlin lawyers Thomas van Aubel, a friend of Matthias Woestmann and Jutta Freifrau von Falkenhausen, the wife of Thomas van Aubel are concealed as the owners behind Sycamore GmbH. The unlawful capital increase is the subject of an ongoing legal dispute in Berlin.

April 2nd 2019.  BERLIN — The founders of envion AG strongly oppose the findings of an…