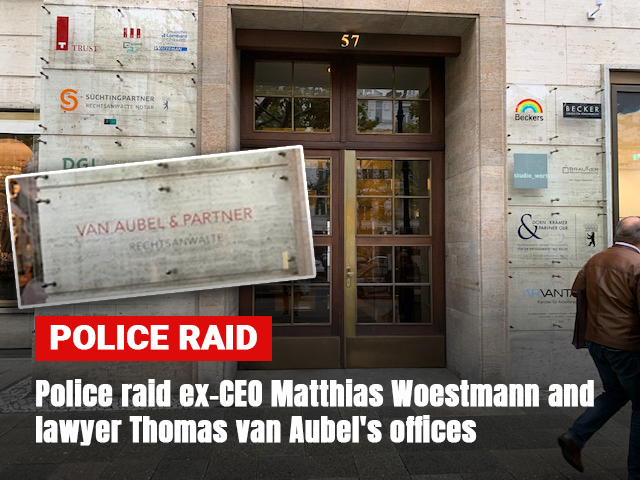 Property belonging to envion AG’s former CEO Matthias Woestmann and the law offices of Berlin lawyer Thomas van Aubel (Van Aubel & Partner Attorneys at Law) were subject to surprise raids by Berlin police, according to an article published online today by German business magazine CAPITAL. Investigators seized documents and hard drives from the premises after prosecutors ordered raids at multiple locations connected to an illegal scheme which led to the collapse of the Swiss cryptocurrency mining company. State prosecutors have been investigating van Aubel and Woestmann for some time after their illicit takeover and subsequent cover-up caused a scandal in the blockchain world.

Berlin’s state prosecutor confirmed the raids with the journalist from Capital.

Envion made headlines in 2018 after raising $100 million in an initial coin offering (ICO) from over 37,000 investors in one of the most successful fundraising campaigns of all time. Woestmann and his longtime business partner van Aubel conspired to carry out an illegal capital raise in the days after the funds were collected which diluted the majority ownership held by the founders via their company Trado GmbH. A court injunction won by Trado and founder Michael Luckow against Woestmann and van Aubel’s shareholding companies blocked the new owners from accessing envion’s assets or profiting from an attempted sale of the company.

The beleaguered ex-CEO and his partner have been on the losing side of multiple civil cases which determined their activities to be “immoral and especially reprehensible” as well as the cause of many millions of dollars in damages to envion’s investors and founders.

Prosecutors did not comment on specific charges or how long the suspects had been under surveillance.

Woestmann and van Aubel launched a media campaign to cover up their activities immediately after news of the illegal capital increase was made public. Woestmann was featured in German finance daily Handelsblatt in May of 2018 alleging that envion’s founders had produced more tokens (securities) than was allowed. Documents and an independent audit supporting his accusations later proved to be false, but not before media outlets across the globe spread the false accusations. Nervous investors believed Woestmann’s false statements, leading to lawsuits against Trado GmbH and envion AG for alleged errors in the company prospectus.

Berlin’s regional court subsequently dismissed Woestmann’s allegations that investors had been deceived about the total number of tokens issued during the ICO and that Trado’s role in the company had been concealed.

The court’s independent calculations showed that no unlawful tokens had been produced and that the prospectus would not have been violated even if too many tokens had been generated, since unused tokens were to be destroyed. The court added that the investors’ lawyer failed to provide any evidence whatsoever that the founders connected to Trado GmbH had any intent to defraud investors at any time and thus failed to meet the minimum requirements for establishing liability.

Further rulings by both Berlin’s District Court and Superior Court found that the unlawful capital increase and activities perpetrated by Woestmann and van Aubel via their companies Quadrat Capital GmbH and Sycamore GmbH exhibited a “special degree of recklessness” that is “incompatible with the fundamental values of the legal and moral order.” Lawyer Jutta von Falkenhausen is co-CEO of Sycamore GmbH along with her husband, Thomas van Aubel. Sycamore is envion’s majority shareholder since the illegal dilution, holding 61% of envion’s shares.

Envion’s founders, led by Michael Luckow, recently announced the formation of the Liquidation Upgrade Program (LUP) which will distribute millions of dollars’ worth of claims in the liquidation and damages lawsuits donated by the founders to token holders. An independent trustee will distribute money awarded to the founders during the liquidation for their tokens or shares in envion to token holders who sign up for the program via the website www.liquidation-upgrade-program.org.

Awards for damages lawsuits against Woestmann, van Aubel, and their companies could exceed $20 million and will also be donated to LUP members by the founders. Membership is completely free and open to anyone holding envion tokens acquired during the ICO or afterwards from cryptocurrency exchanges.

“Envion’s highly motivated team and global community came together and took the idea from concept to the first steps of mass production with remarkable speed. We would have liked to continue showing envion’s potential to be a transformative force for positive change, but our generation’s vision for an ecological and decentralized future was cut short by old-economy tricks,” commented Michael Luckow Trado’s CEO and one of the originators of the envion concept. “The criminal investigation of Matthias Woestmann and Thomas van Aubel is an important step on the road to justice for the thousands of investors victimized by their malicious actions. Donating to the Liquidation Upgrade Program is just one more way we are putting our words into actions, demonstrating our commitment to justice, and winning back the trust of the envion community who supported our vision.”

ENVION, WOESTMANN, THE APATON GROUP, AND THE CANADIAN BIG CONNECTION and its ‘REPORT’

This is an ARTICLE written by fintelegram.com about the connections between Envion CEO Matthias Woestmann…

Envion’s founders received information from the court. THE FOUNDERS WON!