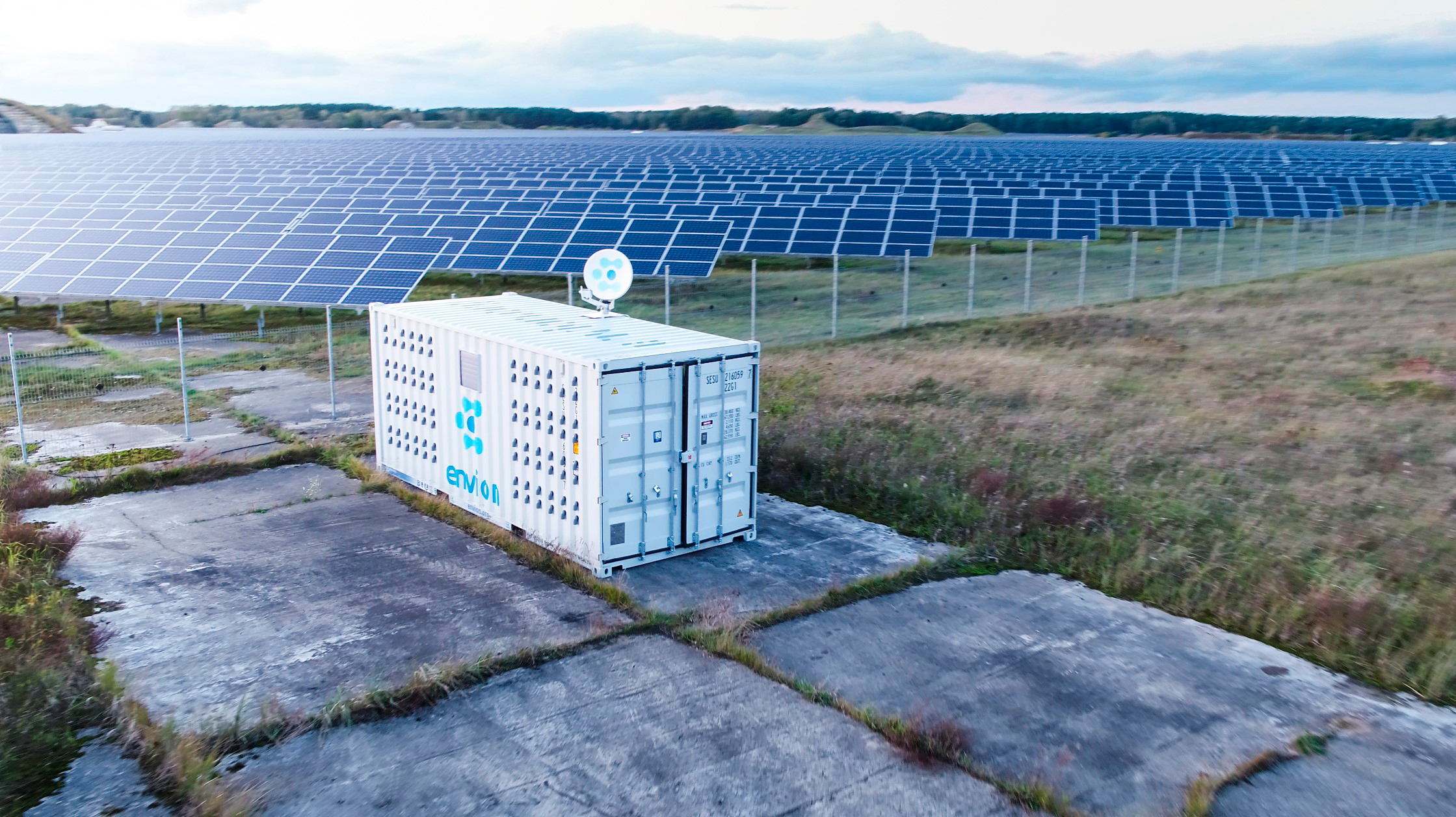 In the middle of a spacious factory building in Berlin-Spandau, three containers are stored, standard size 20 feet, the long sides studded with small intake manifolds. Next to them, workers mill sheet metal parts with a roaring loud machine. At the containers, however, nothing is happening – absolutely nothing. And that for months.

Michael Luckow was not here for a long time. Now the lanky 34-year-old opens the heavy padlock on one of the containers and shows the inside: left and right metal shelves full of computer hardware, in the middle of two powerful fans, plus switch boxes, cable trays and power connections.

The container is a prototype for a mobile data center, conceived by Luckow and three partners, the founders of the Berlin crypto start-up Envion. Their idea: The computers inside generate new blocks for the Bitcoin Blockchain and earn money, just like the big mining farms in China, Russia or Iceland. The difference: Instead of a large data center Envion wants to send many small containers on trips and set them up wherever energy is cheap at the moment. Wether it is a northern German wind farm, which is resting due to grid congestion, or a solar power plant in the desert of California, which is not fully utilized. Even in extreme climates, the containers should be able to run – thanks to the self-developed ventilation system, in which fans push the warm air out of the container, creating negative pressure inside and sucking cooler air through the almost 100 nozzles on the outer wall.

Envion was supposed to be the smart, mobile alternative to the gigantic mining farms with their huge fossil energy consumption, the perfect combination of two worlds of advancement: blockchain technology and renewable energies. The concept struck: More than 30,000 investors invested over $ 100 million in the project earlier this year with an Initial Coin Offering (ICO). It was the sixth largest ICO in the world at that time, and in Germany no project has achieved a similar amount to date.

In the booming ICOs since 2017, start-ups issue their own crypto currencies: so-called tokens that function like shares or vouchers. At Envion, token holders should participate in the revenue from data center operations. The prospect was a return on investment of 161 percent – per year.

A bold promise. And one whose fulfillment is becoming increasingly unlikely. Because shortly after the ICO the company crashed into chaos. Founder and management accuse each other of fraud. Apart from the prototypes in the warehouse, there are no containers, not a Bitcoin was mined, the Envion token has lost well over 90 percent in value. Investors are angry, frustrated and powerless.

Envion is not the first ICO to go wrong. A survey by Boston College in July found that more than half of the startups who used the crypto method to collect money, already ended four months later. Sometimes scammers are at work, sometimes cutthroat. Sometimes a business model is unrealistic, sometimes the team is incapable.

The Envion story begins in early 2017. Four friends meet in Berlin, Luckow is their spokesman, he founded his first company at the age of 18. Now he wants to get involved in the blockchain hype. The safest method seems to be cryptomining. The idea for the container was born.

For days and nights, the founders tinker with the prototype and the necessary software. At the same time, they are preparing the ICO, which was supposed to start on December 1. The schedule is ambitious, though the team has up to 25 employees and Luckow’s company Trado is always on hand. The founders quickly realize that they need a partner.

In the summer of 2017, they meet Matthias Woestmann in a café by Berlin’s Halensee. The former ARD correspondent is considered an excellently connected energy market professional. They agreed: Woestmann, as CEO, should prepare the ICO, give the company a respectable face, bring in investors and make contacts with the energy industry. Instead of a salary, Woestmann is involved with 19 percent in a still to be founded company, the rest should be kept by Luckow and his team. Woestmann, who therefore chooses the Swiss blockchain metropolis Zug, also takes over the registration of the company. He initiates the Envion AG and becomes its CEO.

The managing director takes care of the securities prospectus, he looks for and finds first investors, brings prominent advisors such as the former CDU politician and today’s energy lobbyist Friedbert Pflüger on board. The 81% portion of the founders’ shares should first be escrowed, as it is fixed in an agreement, and only shortly before the ICO transferred to them.

The founders place their complete trust in their partner, let him do it, barely safeguard it. In retrospect: naive. But they are busy day and night with development and relieved that they do not have to spend time with bureaucratic formalities.

When the ICO finally starts in the middle of January, Luckow stands at a check-in desk at Tegel airport and taps commands into his laptop like one possessed. He has to release every investment and convert the money into tokens. With Woestmann and another partner he is on his way to China to conclude contracts with suppliers for mining hardware.

When the three land in Shanghai, the ICO is over. More than 100 million dollars are in the banks – a gigantic success. However, the trio in China do not begrudge themselves time to celebrate. Appointments are waiting for them.

The falling-out comes unexpectedly. Towards the end of the trip Luckow and Woestmann get into a fight. The reason is a trifle: The founder has arranged an appointment with a manufacturer – without asking the CEO, who had already booked his return flight that day. Woestmann, Luckow remembers, reacted extremely emotionally, that he was suddenly completely changed. Furious, he shouted at him: he would not stand to be uninvited! “On the return flight, he became paranoid,” says Luckow. “He was afraid to be forced out of the company.” He claims the CEO later told him so himself. After the quarrel, the contact between the two parties is temporarily broken off. When Woestmann returns at the end of January, his e-mails have an unusually sharp tone.

On January 26, the founders act. In writing, they ask their CEO to transfer their agreed upon shares. One day later a meeting takes place. Almost casually, Woestmann reports on a capital increase at Envion AG. Instead of the previous 150,000 shares, there are now 390,000. His advisor, the Berlin lawyer Thomas van Aubel, is now one of the shareholders. The founders are shocked. Their share of the company thus dropped from 81 to 33 percent. “Woestmann and van Aubel stole our company,” says Luckow.

The next meeting is scheduled for January 31st. It is attended by: Thomas van Aubel. The founders are calling for the retransfer of their shares. Van Aubel is not fundamentally averse, but demands to keep 10 to 20 percent of the shares. The meeting ends resultlessly.

The next day, Woestmann writes to the founders that van Aubel had “no interest in holding the shares”, he just wanted “his costs back”. Thus, the “original conditions” could be restored.

For a brief moment, a solution seemed within grasp – and Envion could finally start production of containers for which a service provider is already set up in the Czech Republic. But then the bomb explodes. The founders are hearing that Woestmann and van Aubel are preparing to sell the company.

The mudslinging begins. The managing director now assumes that the founders have cheated on their tokens – and thus goes public. “As early as the end of February 2018, it was suspected that more than 20 million tokens were generated and distributed by the Envion ICO without coverage by the prospectus,” he writes on the company’s website. As a result, he and van Aubel acquired a majority stake in the company through a capital increase “in order to protect the accumulated assets of investors from Michael Luckow’s access”.

An interesting explanation – but the timeline does not fit, because the capital increase already took place in January. The founders fire back on their part : Luckow presses charges, several courts in Switzerland and Germany deal with the case. Meanwhile, the company is paralyzed.

WHERE IS THE MONEY?

The millions from the ICO, mostly paid in cryptocurrencies, are on accounts in Liechtenstein and in digital wallets of Envion AG. About 30 to 40 million dollars should be lost, because since January, the Bitcoin price has halved. Bitter for the investors exchanging information via a website and a telegram channel. Most investors are on the side of the founders, says a spokesman who wants to remain anonymous. By contrast, only about five percent trust Woestmann’s portrayed version.

Capital asked the Envion CEO for an interview. First he announces a meeting, then he cancels it on the grounds that his advisers have advised him to only respond in written statements. But even a questionnaire remains unanswered. His lawyers, writes Woestmann a day later, had “not allowed him to provide press information.”

Luckow considers attorney Thomas van Aubel to be the mastermind behind the expropriation attempt – Woestmann is only his puppet, he claims. Van Aubel also refuses to answer questions from Capital.

The lawyer has a colorful past. At the Bitterfeld solar cell manufacturer Q-Cells, which went bankrupt in 2012, he was involved in a scandal about insider trading. Saxony-Anhalt had funded the company through the state-owned investment company IBG with millions. Head of the IBG was Johannes von der Osten – who himself owned shares in Q-Cells, managed in trust by van Aubel. Both men sold their share packages just months after Q-Cells went public and each earned high double-digit millions while most investors lost everything. A similarly dubious role played van Aubel as the main shareholder of the plastic manufacturer Balda. He replaced the entire board with himself and two confidants. Shareholders revolted that van Aubel wanted to “exploit the corporation piratically” in order to plunder the company’s cash register, and Luckow feared similar things at Envion.

But this danger seems banned now. The allegation that the founders have enriched themselves with tokens was refuted by an expert report on which the Landgericht Berlin also based its judgement at the end of June. In its judgment, Woestmann and van Aubel were prohibited all action that would “lead to a dilution of the shareholding of the current shareholders, as well as all acts which lead to a transfer or encumbrance of the assets of Envion AG”.

A sale is therefore no longer possible. Woestmann and van Aubel are incapable of acting. Especially since the Swiss Financial Supervisory Authority has also decided to investigate Envion because of possible mistakes in the ICO Prospectus. On July 19, the Supervisory Authority set up a law firm as an investigative officer, without whose consent Woestmann and Co. may not take any action.

Luckow is pleased. He still wishes to get into serial production of the containers as soon as possible, he has not lost faith in the project.

And the investors? Many put five, some even six- and seven-digit sums into the project. An investor representative estimates to Capital that two-thirds of the investors would still hold on to Envion if the start-up got back on track within a few months. The remaining third lost hope and just wants his money back.